Storage is the placement of items in containers, whether a player backpack, a Storage Chest, Stockpile, or fuel reserves. 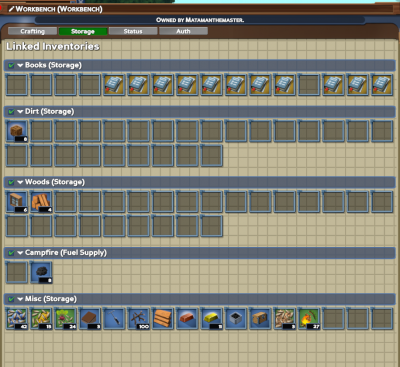 Linked storage at a Workbench. Crafting projects at the Workbench will go into the "Books" storage first, and use resources from there first.

These are World Objects that players and place and store items in. Stockpiles can also store block items

Objects that can be moved and store items. Can store all item types.

Objects that require and store fuel.

Items can be moved freely between linked inventories, even if neither of the two inventories is the selected object.

Players can minimize inventories by clicking on the arrow, which will save space in the menu.

Storage space can best be utilized by placing a storage object or crafting station in the center of the crafting/storage area. By accessing the central storage object, items can be moved 20 m or more by with click-and-drag.

For Storage Chests, the radius of linked storage appears to be 10 blocks (10 m) in a straight line.

Storage range is circular (spherical), so in a diagonal path, the storage range is less, about 7 m. To calculate if two Storage Chests will be in range of each other, find the coordinates of the two chests (the block the object rotates around when placing it down), add the squares of the distances in x, y and z direction, respectively, and compare that value to the square of the range of the object, which in case of the Storage Chest appears to be 10 blocks as mentioned before. In the diagonal example on flat ground, this would be 49 + 0 + 49 = 98, which is smaller (can be equal to) the proposed range of 10 blocks, so 7 blocks diagonally would be in range, as would be 7 blocks in one direction, 5 blocks across and 5 blocks up, which would equate to 49 + 25 + 25 = 99.

, and two stockpiles over a range of 14. The Small Stockpile and Stockpile are symmetrical, so the orientation does not matter and the distance is calculated from the center block (on the lowest level). Tiny Stockpiles with a footprint of 2×2 have their reference block in one corner, so depending on the orientation, there can be 11–13 blocks between them in a straight line.

Fuel supply inventories are also visible, and behave like other containers and vehicle storage. For example, Petroleum can go could be loaded first into eligible Powered Cart fuel supply automatically when crafted at the Pumpjack.

Each storage item can be moved around by dragging storage names. When dragging an inventory, green and yellow bars will appear above and below each inventory listed. The green bar represents where the inventory being moved will be placed. The yellow bars represent where inventories can be moved to.

Click and drag a storage bar to rearrange your storage list. Lines will appear to help guide placing the storage. When a line turns dark green, this is where the storage you are moving will go when you release the mouse button.

Rearranging storage will only change the storage arrangement of the selected object.

Retrieved from "https://wiki.play.eco/en/index.php?title=Storage&oldid=8344"
Category:
This page was last edited on 27 February 2022, at 15:38.
Content is available under CC BY-NC-SA 4.0 unless otherwise noted. Contents of the game "Eco" are intellectual property of Strange Loop Games - all rights reserved.
Privacy policy
About Eco - English Wiki
Disclaimers