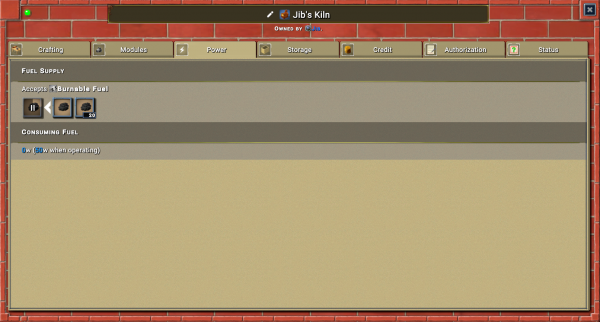 The "Power" tab of a Kiln showing energy consumption, fuel being used, and fuel reserves.

The "Power" tab of an object will show the type and amount of power that is needed or generated.

Electric and mechanical power are measured in watts (W). Fuel power is measured in Joules (J).

Fuel reserves will appear in linked storage, allowing them to be the destination for crafting projects that create fuel items.

A fuel source is any fuel that can be used in the fuel supply of the Power Tab.

Server configurations allow server owners to change the energy values for the different fuels. Servers can modify these values or add/remove fuel types. Consult with your local server admin for accurate fuels.

Recent testing as of Beta 0.7.2 (staging) suggests that either energy contents of fuels are half of what the given info really is, or that stations burn through the fuel twice as fast. Needs further testing.

Mechanical power is supplied through:

The Mill and Sawmill use mechanical power.

To operate, the Windmill or Waterwheel must be placed within close range (~15 blocks) of the object to be powered. It does not appear to matter if the objects are attached to a deed.

There are two types of electric objects in-game: supply objects and demand objects.

Supply objects broadcast power in an area 40 blocks from their origin. This creates a "grid" of power that demand objects can draw from. The power grid appears to be unaffected by property claims.

When placing a supply object, the primary block it is placed on is the center of its power radius. This also applies to larger objects such as Solar Generators.

Within any grid, all supply objects will add their wattage to a combined total, and all demand objects will drain from the total.

Demand objects will subtract wattage from the grid based on their power demand. Demand objects also broadcast power, but only at a distance of 20 blocks from the object.

Although demand objects do not generate power, this means that the radius of a power grid can be expanded by placing a demand object at the edge of a supply object's power radius.

All electronic objects (supply and demand) will link together and become part of the same grid, even if they are offline. Once linked to the grid, an object will remain connected until all supply objects are removed from the grid. If all connecting objects between a supply object and a demand object are removed, the demand object will remain powered, even on the opposite side of the world!

Retrieved from "https://wiki.play.eco/en/index.php?title=Power&oldid=8604#Mechanical_Power"
Category:
This page was last edited on 7 May 2022, at 14:50.
Content is available under CC BY-NC-SA 4.0 unless otherwise noted. Contents of the game "Eco" are intellectual property of Strange Loop Games - all rights reserved.
Privacy policy
About Eco - English Wiki
Disclaimers