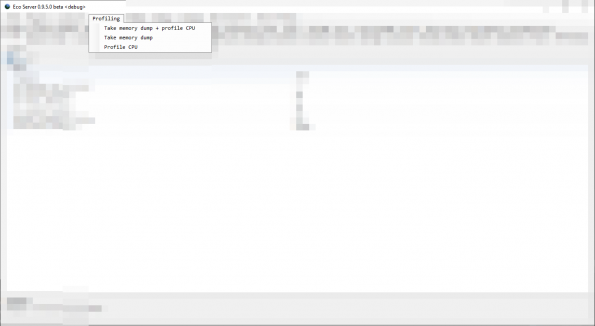 Various profiling options as seen in Server UI (Windows only)

The profiling tools allow Server Owners and Admins to run profiling sessions to gather diagnostic data that is especially useful when the server is experiencing performance problems.

You can use this generated data to complement issue reports for SLG.

These instructions are valid for Update 9.6.4 and higher.

For profiling to work, you need several prerequisites installed on your server:

You have to make sure these are installed globally or available on your systems PATH so the server can run them.

For when the server is consuming too much memory.

Memory dumps can be initiated by:

Memory dump will start the dotnet-dump process, taking a full snapshot of current memory as used by the server process and the file size will be proportional to that. For example, a server that is utilizing 2GB of RAM, the dump file generated will be also 2GB.

For when the server is consuming too much CPU.

CPU profiling can be initiated by:

CPU profiling will start the dotTrace process, running it for 1 minute, capturing everything going on with the process for the time being.

Full profile will simply take memory dump followed by CPU profiling, as if they were invoked in succession.

Retrieved from "https://wiki.play.eco/en/index.php?title=Server_Profiling&oldid=8743"
This page was last edited on 15 November 2022, at 12:36.
Content is available under CC BY-NC-SA 4.0 unless otherwise noted. Contents of the game "Eco" are intellectual property of Strange Loop Games - all rights reserved.
Privacy policy
About Eco - English Wiki
Disclaimers